f the Aussie Millions, staged in Melbourne’s Crown Casino, were a cycle race it would be described as a ‘monument’.

It boasts a long history dating back to 1998 – when known as the Australian Poker Championships and the entry fee was $1,000 AUS with 74 players taking part – and it’s a title many pros would love to have on their curriculum vitae.

Naturally outsiders would consider it bizarre the highest entry tournament is not given headline status but few have pockets deep enough to pay a $100,000 to play a game of cards and this year this high roller event attracted 42 players.

For posterity it must be noted the 2019 winner was 49-year-old Cary Katz who is well accustomed to playing poker for high stakes. In January 2018 the American won the Poker Stars Caribbean Adventure $100,000 Super High Roller netting $1,492,340 in prize money. His lifetime ‘winnings’ are now in excess of $18 million US albeit we cannot accurately determine how much he has invested in entry fees down the years.

Eventual main event winner, Bryn Kenney, had to overcome a substantially bigger field of 821 rivals to etch his name on the hallowed trophy. His reward was a $1,272,598 cheque which was part of a three-way deal negotiated by the final three players.

Fellow American Mike Del Vecchio, officially second, and homeboy Andrew Hinrichsen being the others; they both also cleared $1 million. 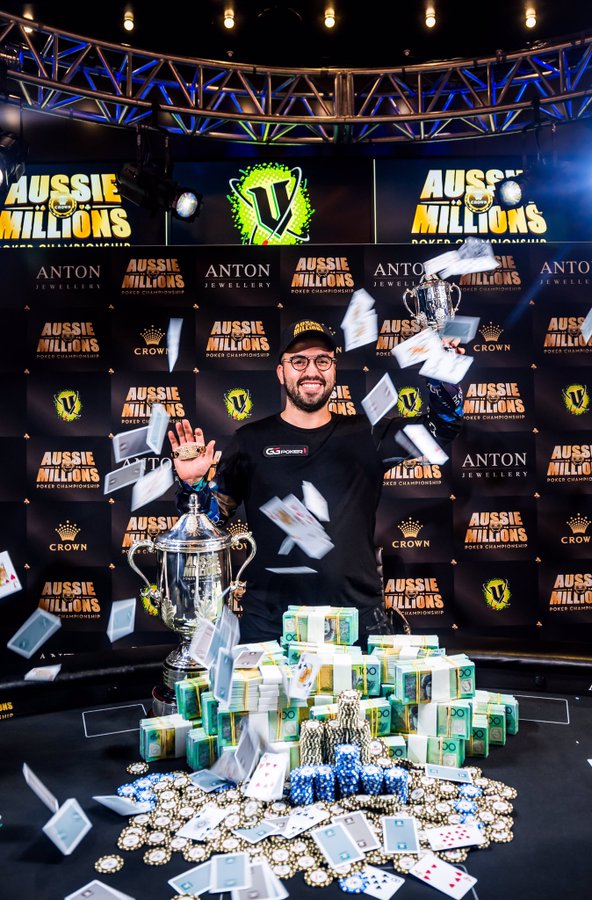 Kenney’s success, which came after five days of play, took his ‘live poker’ career earnings to $26.6 million, a remarkable sum considering he only took up poker in 2007. The 32-year-old, who formerly played Magic: The Gathering competitively, now sits in ninth position on poker’s all-time money list.

Magic: The Gathering is proving a particularly fruitful source of poker talent. In November Frenchman Julien Stropoli, another disciple of the online collectable card game, beat off 3,815 entries to claim the Battle of Malta netting €168,500 for his €550 entry/investment.

Kenny’s 2019 Aussie Millions victory gave him the distinction of being the first American winner of the fabled event. The main event tournament only truly became an international event in 2003 and by 2005 over half of that year’s entry, 263 players, were overseas visitors. Since 2004 American players have claimed 27 final table appearances – it’s noteworthy the Aussie Millions Main Event final table is restricted to seven players.

Canadians have also fared well. Providing two winners, Ami Barer in 2004 and Ari Engel in 2016, Canada’s Sorel Mizzi finished runner-up in 2014 and third in 2010 when countryman Peter Jetten also took fifth. A total of nine final table seats have been claimed by Canadians.

Continental Europeans may not embrace the Aussie Millions with the passion of other nations and consequently their final table appearances are limited. However, 2018 did see a cosmopolitan final table featuring Belgian Johan Schumacher, Norwegian Espen Solaas and Swiss player Stefan Huber.

Possibly the most interesting of all previous Aussie Million winners is 2004 victor Tony Bloom. Bloom was a regular at high-profile poker tournaments around the world during the mid-2000’s but has become better known, in recent years, for his role as Chairman of Brighton & Hove Albion who he helped into the Premier League in 2017.

Away from poker and football Tony Bloom, who unlike most poker players prefers to keep a low profile, has become a renowned racehorse owner. His colours were carried to victory on Withhold who landed a colossal gamble in the 2017 Cesarewitch and took the following year’s Northumberland Plate. Bloom also owns 2018 Cheltenham FestivalStayer’s Hurdle winner Penhill.

In 1998 the competition was known as the Australian Poker Championship, it was $1,000 entry with a ‘limit’ Hold’em format. The following year the competition became a ‘pot limit’ discipline tournament. From 2000 onwards the event demanded $1,500 entry and became an en-vogue ‘no limit’ Hold’em format. The only notable changes since have been the entry fee which became $5,000 in 2002 and $10,000 in 2003.

$671K! Buddhist To Give His Biggest Ever Poker Win To Charity

A Buddhist poker player who won $671,240 at a tournament in the Bahamas plans to donate his biggest ever windfall to charity. Canadian Scott Wellenbach, 67, has been playing poker at a high level since Read more…

SHARELINES Win €800 in a snap for just some pocket change in Premium Steps tournaments at bet365 Poker. bet365 Poker is well known to sports betters and casino game enthusiasts. In fact, if you love those Read more…